Today is a day of rememberance for us all, me being a Brit and now living in the  United States, makes me so proud that people fought for the likes of me to be able to live the way I do.

I wanted to thank everyone in the servises today for keeping the world a safer place, and now 100 years ago, this marks the first world war Centenary and I have that moment in my 2 minute of Silence as Big Bens tolls its 11th hour.

Watch ceremony at the Cenotaph in London where the Queen led tributes to members of the armed forces who have lost their lives fighting for the nation.

Remembrance Sunday services are being held across the United Kingdom to honour the country’s fallen troops.

In London, the Queen led a ceremony at Whitehall’s Cenotaph where she laid a wreath in memory of members of the armed forces killed while serving the nation.

The event is the focal point of the country’s Remembrance Sunday ceremonies and saw other senior royals and political leaders also leave floral tributes at the memorial.

A two-minute silence at the heart of the service was marked at the beginning and end by the King’s Troop Royal Horse Artillery firing one round from one of their 13-pounder First World War guns from Horse Guards Parade.

Security around the royal family and senior politicians attending today’s events was at its tightest since 2001 after police and the intelligence services claimed to have foiled a plot by Islamists to mount a terrorist attack.

The final ceramic poppy has been laid at the Tower of London memorial art installation as ceremonies took place in the UK and abroad on Armistice Day.

Other remembrance events were held in military bases, churches and schools.

A two-minute silence honouring those killed in conflicts since the start of WW1 took place at 11:00 GMT.

In London, remembrance ceremonies took place at Westminster Abbey, the Cenotaph and Trafalgar Square. Among the commemorations elsewhere: 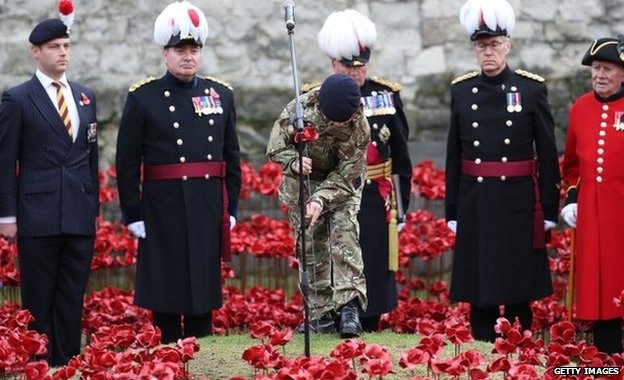 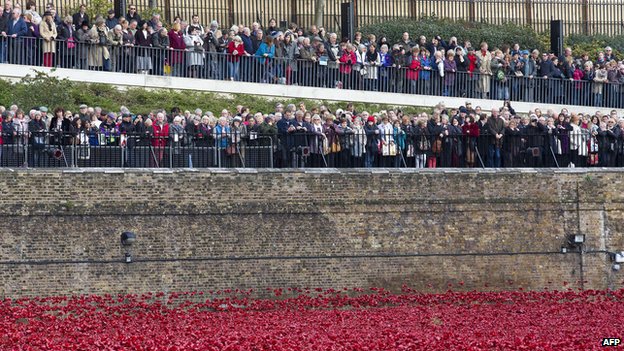 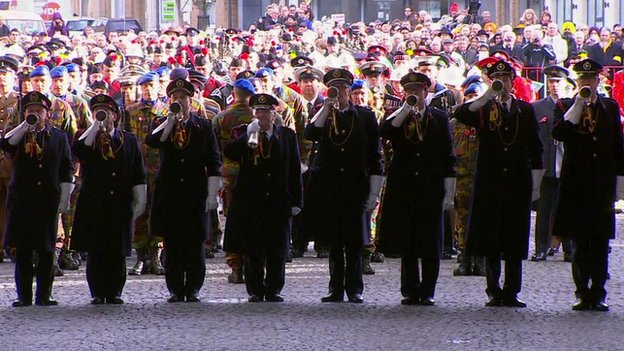 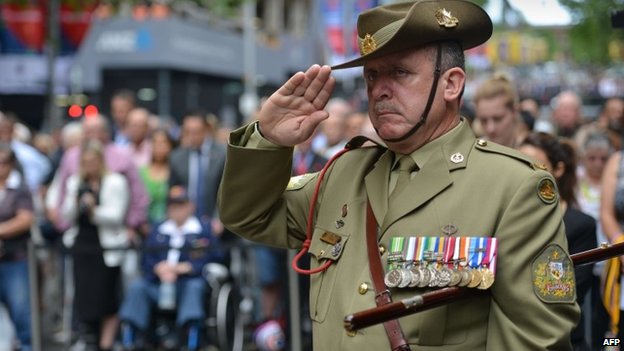 Services were held in various countries, including Australia 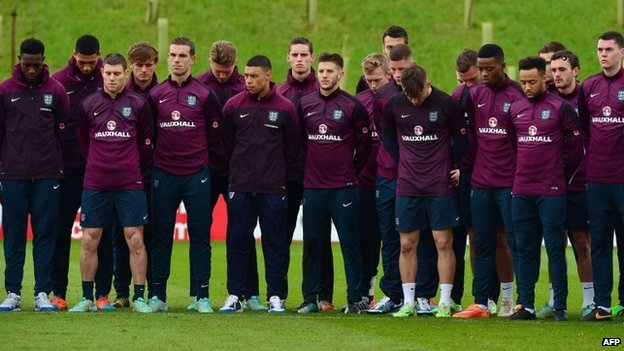 Villages, towns and cities came to a standstill at 11:00 GMT, as did the England football team 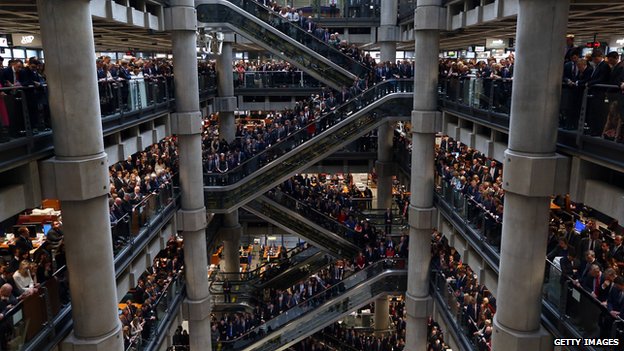 The silence was observed at Lloyd’s of London 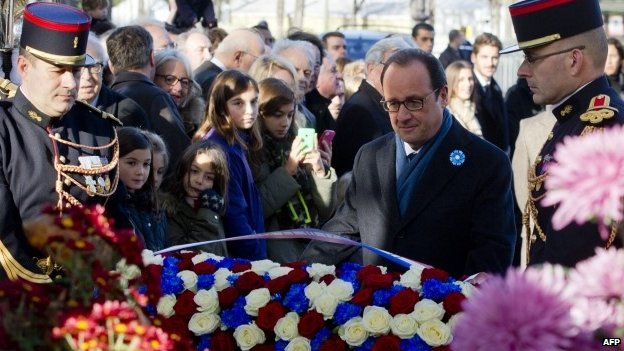 The cadet, from Reading Blue Coat School in Berkshire, was watched by thousands as he placed the ceramic flowers in the moat of the Tower of the London.

His great-great-great uncle, Private Patrick Kelly of the 1st Battalion, Irish Guards, was killed just weeks before the end of the war on September 27 1918.

Cadet Hayes admitted he was nervous, but said “It is an amazing honour, seeing all these poppies and I managed to plant the last one.”

By Peter Hunt, BBC royal correspondent, at the Tower of London

In a capital city with an energetic – at times frenzied – pace, there is a quality that can be in short supply.

The silence at the Tower of London – temporary home to the installation of ceramic poppies – wasn’t just observed for two minutes, as elsewhere in the country.

For a chunk of time at this major tourist attraction, most people were lost in their thoughts. Those who did chat spoke only in hushed tones to those beside them.

Armistice Day marks a century of sacrifice from the First World War to Afghanistan.

For many the art installation at the Tower has been an opportunity to reconnect with their own family’s past.

As they stood around the moat of the former fortress, palace and prison they spoke of the loss their relatives had experienced and of the need to remember.

All eyes were on the poppies. Their existence, girdling this ancient monument, induced a temporary state of near reverence.

Each poppy represents an individual who didn’t grow old.

Read more from Peter on his correspondent page

This year marks the 100th anniversary of the start of World War One, 70 years since the D-Day landings and the end of Britain’s conflict in Afghanistan.

Since last year’s Armistice Day, another seven members of the British armed forces have died in service – including five who died in a helicopter crash in Afghanistan in April.

Stephen Clarke, head of remembrance for the British Legion, said: “This year it feels like there are more poppies out in the streets and a lot of different styles of poppy, because remembrance is very personal.”

Richard Hughes of the Western Front Association, which organises the Annual Service of Remembrance at the Cenotaph, said this year’s commemorations were not just about the end of World War One.

“We have got the modern version here with us stepping back from Afghanistan,” he said. “That itself has tremendous resonance.” 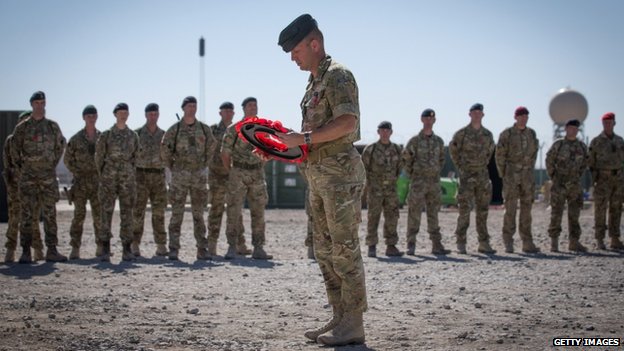 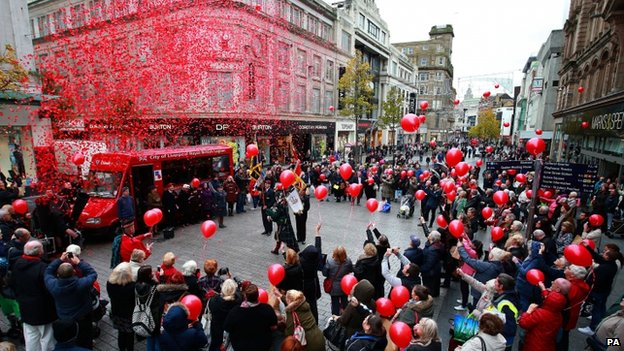 Balloons and confetti were released in Liverpool City Centre 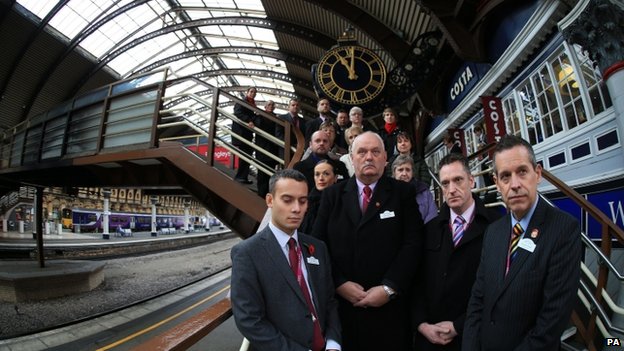 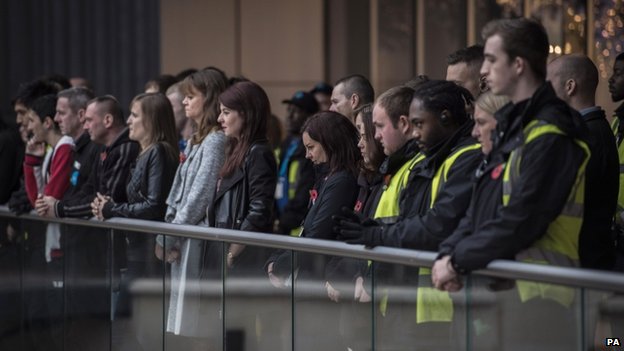 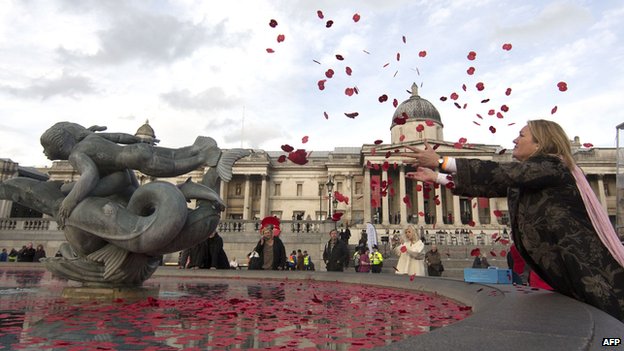 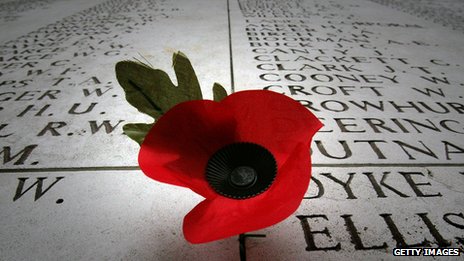 One of the biggest events was at the Tower of London, where a commemorative art installation has been drawing thousands of visitors.

Each ceramic poppy in the artwork – Blood Swept Lands And Seas Of Red – represents a British or colonial death during World War One.

On Sunday, two-minute silences took place across the UK and the Commonwealth.

The Queen, political leaders and military veterans laid wreaths at the Cenotaph on Whitehall – the focal point of Remembrance Day services.

Armistice Day has been marked on 11 November every year since 1919 – a year after the Allied forces signed an agreement with the Germans that would end WW1 at 11:00 in the morning.

After the Second World War, commemorations were adapted to honour the fallen of both conflicts, and Remembrance Sunday was established to replace Armistice Day.

From 1995, the British Legion campaigned successfully to restore the two-minute silence to 11 November as well as Remembrance Sunday. 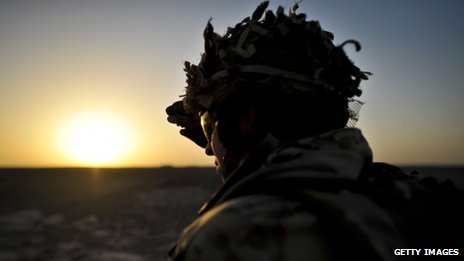 What can today’s soldiers learn from WW1?

Are you observing a two-minute silence today? How will you mark the anniversary of the World War One armistice? You can share your experience by emailing [email protected]. If you are willing to be contacted by a BBC journalist, please leave a contact number.